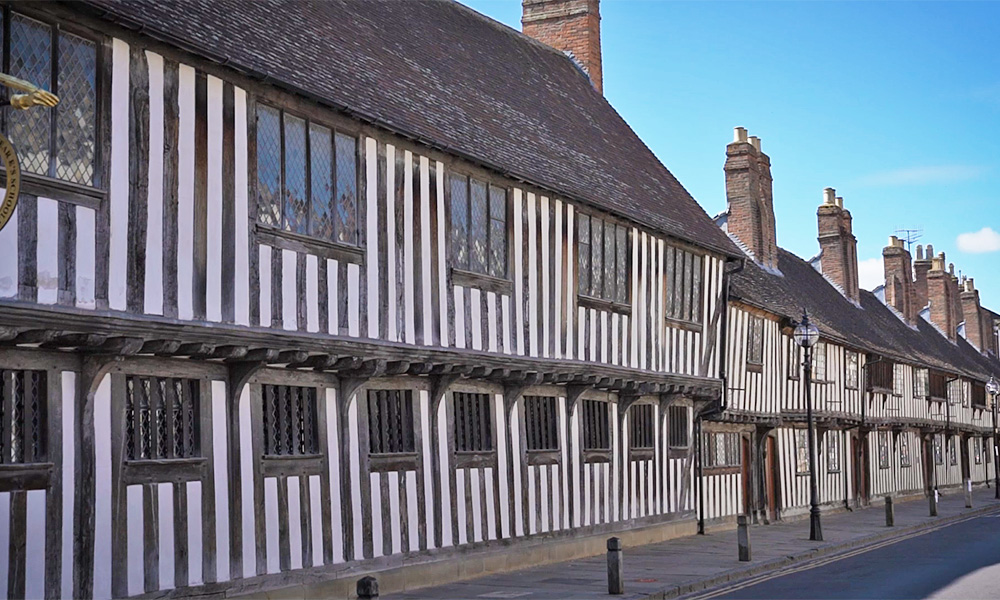 The timber-framed Guildhall and almshouses are a particularly impressive range of buildings along Church Street, connecting to the Guild Chapel.

The Guildhall dates to c.1420 and was part of a rebuilding programme which created a ground floor meeting room, parlours for guild chaplains and their own mini-chapel, which had an altar and a painted reredos behind it. Upstairs was a great hall and chamber where the Guild of the Holy Cross held their feasts and other meetings.

The almshouses are also timber-framed and extend along Church Street providing an impressive legacy paid for by Hugh Clopton’s former apprentice, friend and executor, Thomas Hannys. Look closely and you will see that the first of these buildings is slightly different to the others. It was the Guild’s early schoolhouse, accommodating just a small number of boys with a master’s chamber above it.

In the sixteenth century, the Guildhall was taken over by the Stratford Corporation and became their meeting place, and site of the Court of Record. The guild’s early grammar school moved into the Guildhall, and it was here that William Shakespeare was educated and probably saw - and possibly acted in - his first plays, performed by travelling companies of players.

Today, the building is looked after - and used daily - by King Edward VI Grammar School, a direct descendent of the original guild foundation. It is usually open to the public and there is a small entry fee.