by Lindsay MacDonald and Maureen McRoberts

A place in time

Holy Trinity parish church sits on a slight rise above the floodplain of the river Avon, its spire drawing thousands of tourists and pilgrims every year to its shady churchyard, framed by avenues of lime trees.

Although the church is most famous today as the burial place of William Shakespeare, it has been at the heart of Stratford-upon-Avon’s story since the earliest days of a settlement at the junction of a river crossing and the Roman road. By the eighth century, the Bishops of Worcester had founded a monastery here, and the settlement flourished as a result of this connection, especially after the grant in 1196 of a market charter, and the laying out of a new town in the distinctive grid pattern of streets still preserved in the layout of the town.

The guild of the Holy Cross, founded sometime before 1269/70, had close connections with Holy Trinity. Many of its members would have been parishioners and the parish church was still the place where Stratford’s citizens were baptised and buried. The guild had close connections with two other religious fraternities based in the church: the guild of the Blessed Virgin Mary who maintained an altar and chapel, probably at the east end of the north aisle, where the Clopton Chapel is today, and the guild of St. John the Baptist, which also had its own altar. The three guilds amalgamated in 1403 to become the Guild of the Holy Cross, the Blessed Mary and St John the Baptist, and this tripartite dedication was reflected in the design of the guild seal, the Doom painting in the Guild Chapel and the reredos behind the altar in the Guildhall.

The existence of multiple religious guilds in Stratford-upon-Avon is a reminder of medieval belief in Purgatory. After death, it was thought that the soul would suffer in Purgatory, atoning for sins, until Judgement, or Domesday. Various activities undertaken in life, such as going on pilgrimage, attending particular masses, or paying for candles (known as ‘lights’) on church and chapel altars might help speed the passage of one’s soul through Purgatory. The support of saints and especially the Blessed Virgin Mary was sought to ‘tip the balance’ of the judgement scales. A particularly popular way of encouraging people to join a guild or visit a church was the securing of an ‘indulgence’ from a Bishop, Archbishop or even the Pope - days, months or even years of remission in Purgatory. St Mary’s guild was particularly effective at securing indulgences during the fourteenth century - and particularly popular as a result!

For the wealthiest members of society, there was also the option of founding a ‘chantry’: an altar and the salary of a priest or priests who would say prayers and masses continually and sometimes even perpetually for your soul. In 1331, John de Stratford, Bishop of Worcester and later Archbishop of Canterbury founded a chantry dedicated to St Thomas Becket, on the south side of the church. Further donations of land and money inspired by his foundation ultimately led to the establishment of a College of priests and choristers and a permanent College building located near the site of the present parish hall (although the choristers are thought to have been accommodated in the room above the medieval charnel house on the north side of the church, to which bones were relocated as the churchyard filled up with burials, and which was only demolished in the early nineteenth century!) By the mid sixteenth century, the College was so successful that the church became known as the Collegiate Church of the Holy and Undivided Trinity; a title it still holds today.

What would Holy Trinity have looked like in Hugh Clopton’s day?

The earliest fabric in Holy Trinity dates to the early thirteenth century and is concentrated in the centre of the church, known as ‘the crossing’, and transepts to its north and south. The tower may well have been constructed at this time, although the spire itself dates to the eighteenth century,  replacing an earlier but smaller structure. The nave, or main body of the church, dates largely to the fourteenth century, but the upper storey with its row of clerestory windows, and the great west window window which flood the nave with light were probably added by Ralph Collingwood, Dean of the College from 1491-1518, together with the porch. It seems likely that both Hugh Clopton’s bequest to Holy Trinity and that of his former apprentice, friend and executor, Thomas Hannys, were diverted to help complete this work. In the 1480s, Hugh Clopton had already paid for the church’s north porch and for the stained glass in the new chancel built by Thomas Balsall.

Hugh Clopton’s Holy Trinity would have looked very different from the subtle golden tones of the Warwickshire stone and whitewashed walls we see today, and a wonderful sense of this can be gained from a reconstruction of the Lady Chapel by Janet Hall.

The fifteenth-century Holy Trinity would have been a blaze of colour, filled with painted images and statues of saints, before which burned beeswax candles, filling the air with a sweet smell, suffused with frankincense. Surviving inventories, dating to 1454 and 1477 describe sets of richly embroidered altar cloths and priests’ vestments designed to be used during the various liturgical seasons and festivals of the church, together with gold and silver chalices, candlesticks and chalices and pattens, used in the mass. Not surprisingly there was also a chest to keep things locked safely away!

Next to the Lady Chapel was another chapel, dedicated to the Holy Trinity, but more impressive still was Becket’s Chapel, located at the east end of the south aisle of the nave, which attracted thousands of pilgrims a year. The nave would have been separated from the chancel beyond by a great wooden screen known as the ‘roodscreen’, parts of which still survive today. It was surmounted by a great Crucifix (the 'rood', from the Anglo-Saxon word for cross), flanked by images of the Virgin and usually, St. John the Evangelist as at the Guild Chapel, where the outline of the rood can still be traced against the Doom painting. However, it has also been suggested that Holy Trinity's Rood figures might have included St. John the Baptist, reflecting the presence of the guild dedicated to him in the church, and his association with the wool trade. The rood and its images were illuminated by beams of light projected upwards from lanterns, maintained by the guild.

When Hugh Clopton died in 1496 he left a great fortune and rather unusual arrangements for his burial, depending on whether he died in London, or Stratford-upon-Avon:

‘Furst, I bequeth and recomende my soule to Almighti God my maker and redemer to the moost glorious Virgyne his moder, our Lady Sainte Mary, and to all the holy companye of heven, and my body to be buried in the chapell of Sainte Kateryne in the parish church of Saint Margarettes in Lothbury in the citee of London, yf God dispose for me to decesse in London afore-saide, or within xx myles of the same. And if it fortune me to decesse upon Stratford upon Avon in the countie of Warr. or in that countrey then my body to be buried in the parish church of the same within the chapell of our Lady,5 betwene the altar of the same and the chapell of the Trinite next adjoynyng therunto ordeyned, and tombed after the discrecion of myne executours.’

We do not know what kind of monument Clopton was buried in at St. Margaret’s in Lothbury, where he did die in 1496. St Katherine’s chapel was a popular place of commemoration for London’s merchants, and he may have opted for an impressive brass monument there, rather than the stone structure he commissioned in Holy Trinity. Sadly, all traces of this monument were destroyed in the Great Fire of London in 1666.

In Stratford-upon-Avon however, Clopton could really make his mark. His tomb is a miniature building in its own right; a stone-cage structure which effectively partitioned the Lady chapel from the rest of the nave. Six octagonal pillars support intricately carved canopies over two four-centred arches. Beneath the eastern arch is a chest-tomb, ornamented by panels of blind tracery, and surmounted by a huge slab of dark grey Purbeck marble.

In the spandrels of the canopy are heraldic shields associated with Hugh Clopton and his mercantile connections. They include the Clopton arms (Cokefield quartering Clopton), the arms of the City of London, the Staple of Calais and the arms of the Mercers of London, featuring the Mercers’ ‘maiden’ (probably originating from the Virgin, depicted as Queen of Heaven).

It is possible that Hugh Clopton designed and constructed his Stratford tomb prior to his death in 1496. Unlike the Becket Chapel, Hugh did not envisage his tomb as a perpetual chantry, at which priests would say prayers and masses for his soul for ever - or at least until Domesday! Rather, he requested a sung requiem mass every day for a month and then for a priest to be employed to offer soul-masses three times a week over the course of the next twenty years (an astonishing 3,120 in total!) Other prayers and masses were also ringing out at the same time across London and the Midlands in the monasteries and hospitals with whom Clopton also had connections. Grateful prayers must surely have been offered by the poor maidens, scholars and householders of Stratford-upon-Avon who also benefited from his generosity.

The Reformation and Holy Trinity

The English Reformation had a huge impact on parish churches such as Holy Trinity. The 1547 Chantries Act not only dissolved religious guilds, chantries and colleges and seized their assets for the Crown, but also removed much of their reason for existing, by denying the existence of Purgatory. Generations of Stratfordians who had given donations to rebuild, enhance and enrich the parish church must have watched as the fittings and fixtures of the Catholic faith were dismantled and paintings on the walls and in glass whitewashed over in advance of the visit of the chantry commissioners. How many of these objects disappeared into local houses or private chapels, hidden away and gradually forgotten about as the century wore on and the Protestant faith gradually established itself?

Stratford’s citizens gradually secured the return of both guild and College lands in their charter of incorporation of 1553. Former guild members, or their sons or nephews reconstituted themselves as bailiffs, aldermen and burgesses serving on the Council. The Guildhall was appropriated as their meeting place and guild objects, such as the fifteenth-century mace, were re-fashioned into civic regalia. The Lady Chapel in Holy Trinity was also transformed. Later generations of the Clopton family added their own impressive table tombs and wall monuments to Clopton’s monument, and the space gradually became known as ‘The Clopton Chapel’.

Today, a small modern statue of the Virgin and child provides an important reminder of the legacy of Hugh Clopton and the middle ages, not only for Holy Trinity church, but also so many of Stratford-upon-Avon’s surviving medieval buildings, from the Guild Chapel, Guildhall and almshouses, to New Place and Clopton Bridge.

Holy Trinity is open daily for visitors and services. To find out more, please visit https://www.stratford-upon-avon.org/. 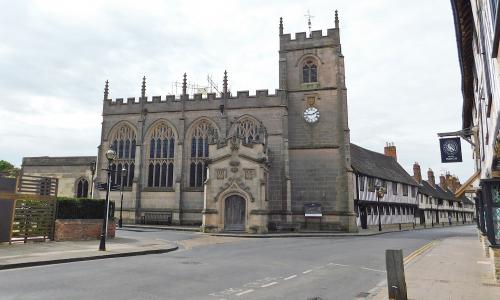